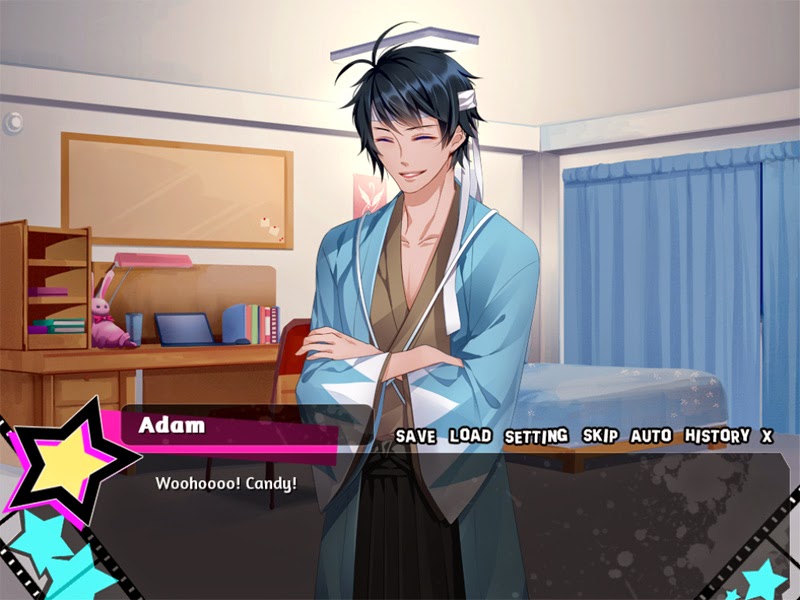 Brush off your twitter accounts, because this Halloween, we’re going trick-or-tweeting!

Tweet us a photo of yourself in your Halloween costume, and I’ll tweet back a picture of candy! Anyone dressed as a sakevisual character will get a DM for a 50% off code good for any sakevisual game through 2015. I’ll also randomly pick one person to get a code for a free game.

To enter, all you have to do is tweet a photo of yourself in your Halloween costume, then tag it @sakevisual and #TrickOrTweet. Only tweets sent on Halloween 2014 will be accepted.

http://www.twitter.com/sakevisual
Posted by Ayu Sakata at 2:14 PM No comments:

Email ThisBlogThis!Share to TwitterShare to FacebookShare to Pinterest
Tags: contests 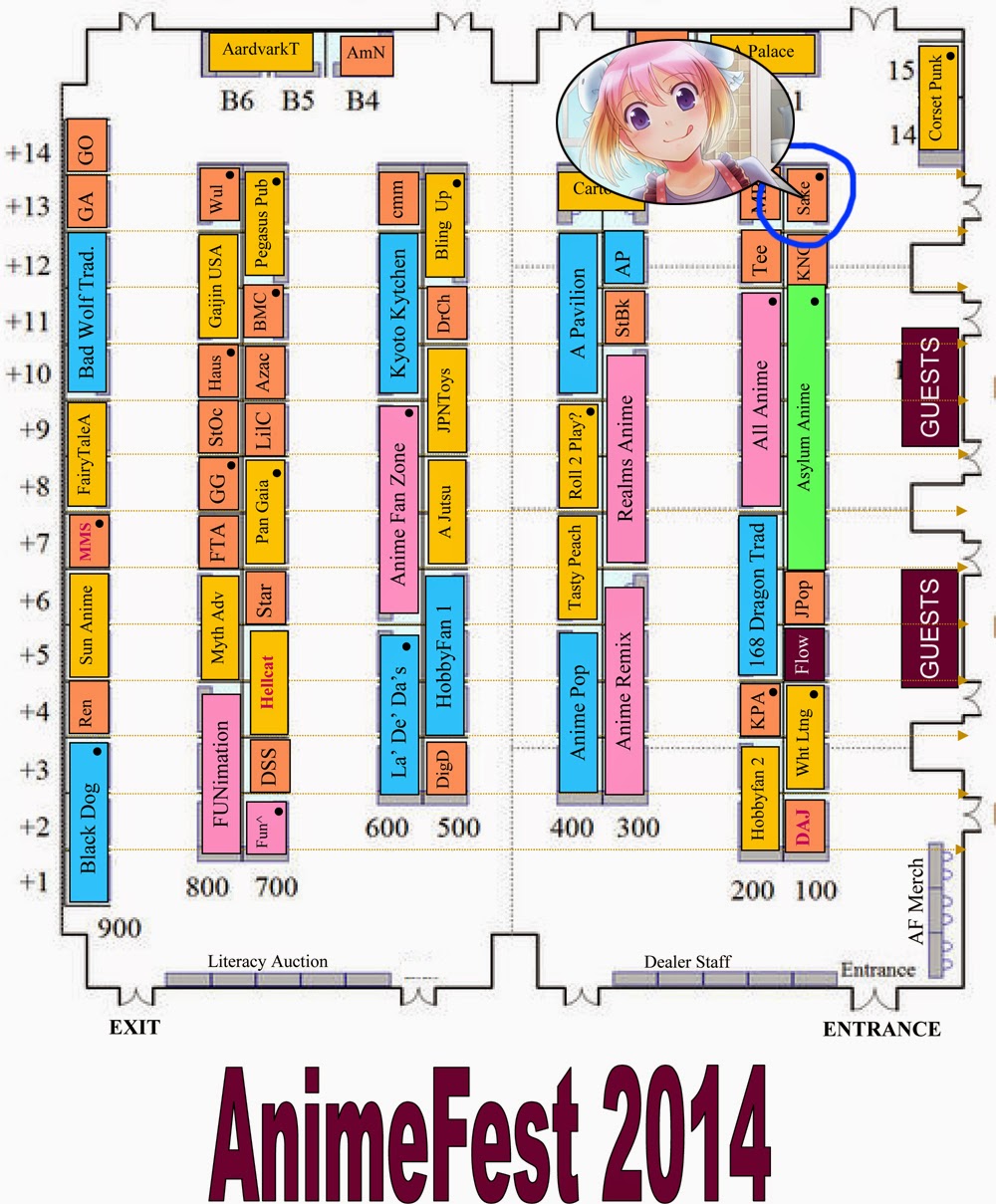 Hey gang, AnimeFest is next week, and we’re excited to see all of you! You can swing by to say hi to us any time at our table in the dealer’s room (hidden in the back, so think of it as a fun treasure hunt!). We’ll have all our Jisei games for sale along with free postcards and a demo of Backstage Pass on display. We’ve also got a panel on making visual novels, and we’d love to see you there!

Friday 8/15 - 5:00pm - Panel Room 6
Visual novels have long been a popular medium in Japan, and in the past few years they’ve been gaining popularity in the west. But did you know that you too can make your own visual novel? Join Ayu Sakata and sakevisual as we go over the process of making your own visual novel. We’ll talk everything from planning, to tools of the trade, and releasing your final masterpiece. There will be free stuff!
Posted by Ayu Sakata at 1:51 PM No comments:

Great news, gang! Backstage Pass is now available for Early Access on Steam. We've been working really hard to get here, and and we couldn't have done it without all the incredible support from all of you. Thank you!

For those of you who pre-ordered Backstage Pass, fill out this handy form for your free Steam Key!
Posted by Ayu Sakata at 2:31 PM 2 comments:


If you've been following us on twitter, you already knew this was coming. It's the packaging for the standard edition and it's super pretty!

A few other news items for you: A game update should be coming soon. I've got a couple days of uninterrupted work coming up (fingers crossed), so I'm hoping to finally catch up on stuff. Our Steam early access is also prepped and waiting for Valve to approve it. I don't know how long that will take, but hopefully it'll be soon!
Posted by Ayu Sakata at 11:42 AM 6 comments: 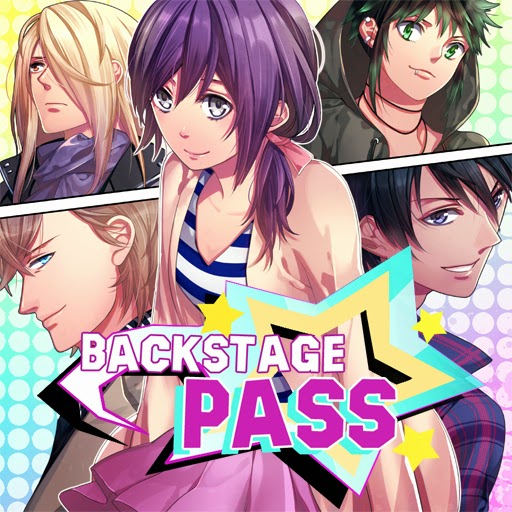 Not much news this week, but we've got some good things to cover, including an important question.

First off, the life situation is starting to get a little better. It still hasn't left me with much time to work on Backstage Pass, but it looks like things are starting to work out. Fingers crossed. Backstage Pass is now running fine on Steam. Early Access should start soon.

AND, physical editions are currently being worked on. Hopefully by next week I'll be able to give you a preview of the standard edition featuring new original artwork by tooaya.

We're also working on the special edition right now, and this is where I need feedback from you guys. Right now, the special edition includes the following:
- The game (duh)
- CD of the OST
- CD of Adam Eaton's EP, "Island Heart"
- Companion book with designs, sketches, info, and other stuff
- Five character postcards
- Codes for Steam and Desura

As it stands, I'm not sure how many copies I should have made, so I need a show of hands to get an idea of how many people are interested in having a special edition. Right now I'm being told the final price will be around $70 each, but if we get a lot of people interested, they can lower the price, and I think we would all really like that.

Edit: Anyone who pre-orders will have the option to upgrade for the price difference. You won't be required to buy the entire thing again.
Posted by Ayu Sakata at 1:37 PM 27 comments: 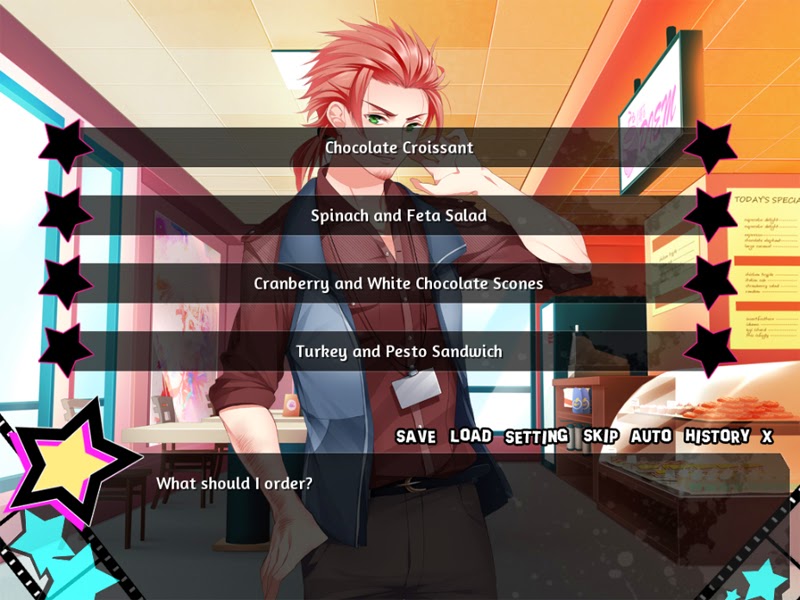 Spent most of this week working on the hidden routes, so not too many screencaps to share. Except the above one, which means exactly what you think it means. The original plan was to release an update with all the routes at the same time, but chances are we'll do one at a time. Also managed to hunt down a few bugs. Fixes will go up with the next beta update.

Also did a little bit of work on our Steam port. If we're lucky, we can get Early Access up for you cool people too. We've got some fun achievements lined up (that may or may not include cupcakes), and I'm trying to figure out trading cards - if anyone has any requests or ideas for trading cards, feel free to leave a comment.

All in all, didn't get as much work done as I had hoped this week, but we look set to have a new route available soon!
Posted by Ayu Sakata at 1:17 PM 1 comment: 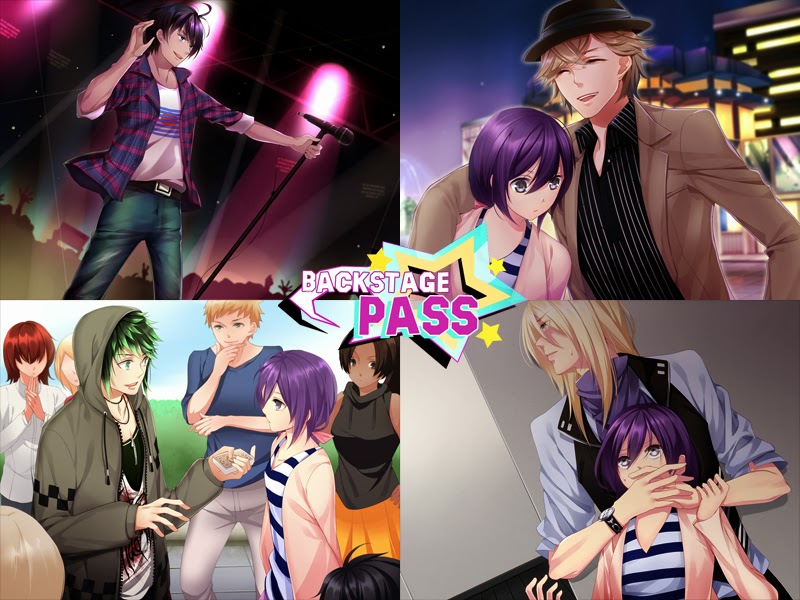 Alright, gang. It's the start of May, the latest beta update still isn't out, and I'm sure most of you are wondering what's up with Backstage Pass. Well, this is the post I hoped I wouldn't have to make, but  it's an important one. First off, don't panic, everything's going to be okay. It's just going to take a little longer than we had hoped.

So where are we when it comes to finishing Backstage Pass? Pretty darn far, actually. Our talented team members have all finished their respective jobs - be sure to thank Lulin, Graeme, and Marc. I've also clocked in 15+ hours in the studio and online with the voice actors (with many more to come). So what does that leave? It leaves putting it all together, fixing bugs, and adding extra content in places that all you excellent beta testers have found to drag on too much. A big task, but a doable one, and two weeks ago, one I was on track to finish by today.

These past two weeks have been very unexpected weeks.

When people ask for advice on making visual novels, I generally suggest padding the schedule to make sure you've got emergency time for unexpected events. What if a relative dies? What if work suddenly adds more hours to your schedule? What if you get sick? However, it never occurred to me to plan for what to do if every emergency happens at the same time. That's kind of where I am right now.

At the moment, I can't share details, since other people are involved who might want to be more private, but I'm juggling several work and personal things.Things are mostly under control now, which is why I've finally found time to sit down and write this post. However, the temporary solution has cut down the amount of time I have to work on Backstage Pass. In the past, I was able to get close to a full work day in every day. Right now, I'm getting 1-2 hours a day if I'm lucky.

What does that mean for Backstage Pass? It means we'll get it done, but the schedule's going to change a bit. We could probably slap a little plaster on it and release it now, but everyone on the team wants this to be a game you guys will love for years to come, so we're not going to take that path. I'll be posting weekly updates to keep you guys in the loop, so please look forward to those.

In the meantime, a huge thanks to all of you guys for supporting us so far. Your words of encouragement and enthusiasm have been amazing. Thanks to the beta testers for being so thorough in helping us make this game great. Thanks to everyone who pre-ordered (because of you, I was able to divert an especially nasty crisis). And thanks to anyone reading this. You guys all rock, and we're going to make sure this game rocks too.
Posted by Ayu Sakata at 9:46 AM 2 comments: